From Ferrara to the Po Delta

A suggestive itinerary, which begins from Ferrara and, on foot or by bike, delves into a neatly ordered succession of valleys and fields joined together by canals, embellished by poplar forests and other trees, and interrupted only by the brick color of buildings. 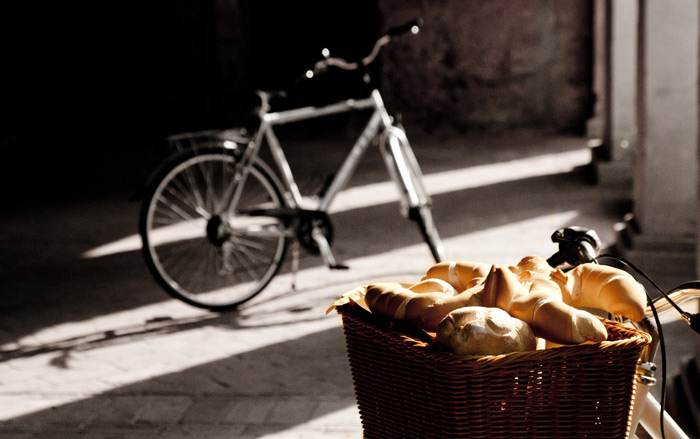 The Itinerary, in Short

The tour begins in the ancient heart of Ferrara and runs along the right bank of the Po, the Great River, with a short stop at the Ro water mill. By biking along the banks or on trails, you’ll follow the Po di Goro until the town of Mesola with its impressive castle and, from here, into the Veneto to the Sacca degli Scardovari with its colorful fishermen’s homes. A floating bridge brings you back to the Emilia region, for a dip in front of the Gorino lighthouse before stopping at the Abbey of Pomposa and discovering Comacchio with its valleys, in a slow immersion “by bike with binoculars” in search of pink flamingoes.

It’s ideal for …
It’s a vacation, between art and nature. The itinerary is perfect for those who love architecture and art but also spacious landscapes to discover slowly, maybe by bike, with moderate physical activity amidst nature. Ideal for photography lovers.

Day 1 - Ferrara, the cradle of the Este princely family 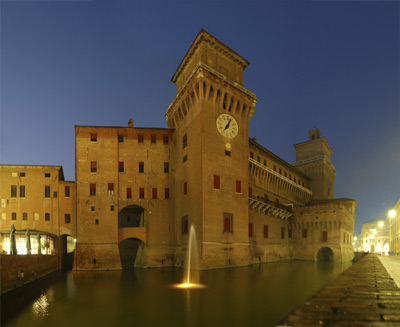 Ferrara bears the elegance and discreet charm of a town to savor slowly, on foot or by bike. In fact, everyone here owns one, using them in all sorts of weather!

The historic center – declared a UNESCO World Heritage Site – is dominated by the Este Castle surrounded by its moat that has protected the square fortress with its four towers since the 1300s. Beyond the drawbridge, you’ll reach the courtyard with its fifteenth-century loggia; climb up to the first floor to see the Hanging Orange Garden by Girolamo da Carpi.

Connected to the castle by a covered passage, there is the Municipal Palace, the Duke’s ancient residence that was enlarged with the sixteenth-century loggia which can be admired from Piazza Savonarola.

A stroll along Corso Martiri della Libertà leads to the Cathedral, consisting of various architecture styles, with a three-section façade and numerous decorative elements; on the right side you can see the Loggia dei Merciai while at the back is the bell tower dated 1442.

Your walk will continue onto Via Voltapaletto towards Palazzo Schifanoia (literally, Palace that Loathes Boredom) and whose name may seem to derive from the intention of its original owner – Alberto V d’Este – who in 1385 commissioned this mundane residence par excellence “to loathe” boredom in every way. Today the Musei Civici di Arte antica is located here; also, don’t miss the Hall of Months, with its fresco cycle which has become Ferrara’s most important work of art in the Renaissance.

Palazzo dei Diamanti owes its name to the façade decoration, made to gather sunlight the most. Commissioned by Sigismondo d’Este and designed by Rossetti, it was built in two stages and today hosts the National Picture Gallery.

Day 2 – Along the Great River

After leaving Ferrara, more sporty visitors can reach the Delta by bike along the right-side bike path of the Po, along the riverbank. A definite stop is at the old Ro water mill, a reproduction of mills along the river and which today can be visited.

In the surrounding area you may stop or eat at a kiosk, in the midst of nature. Relaxation lovers may take a boat ride and continue at ease towards Mesola. Or you may choose to go by bike.

Mentioned also by Torquato Tasso as the town of “the Po on the side and the sea in front,” Mesola is a hamlet with a lovely castle built between 1563 and 1583 by Alfonso II d’Este. The imposing construction overlooks a large square and has crenellated towers at all four corners; in the inside courtyard you’ll find some shops where to savor aromas and food, from typical Ferrara bread to asparagus, enjoyed at the restaurant under the portico.

After Porto Tolle head for Scardovari alongside the Sacca degli Scardovari following the signs for Santa Giulia. The vast pool of water with typical fishermen’s homes is an ideal setting for clam and mussel farms. Here as well a bike is the perfect means of transportation for the “slow pace” of the landscape that offers marvelous sights and great emotions at sunset. With a little patience and good photo equipment, it won’t be hard to “capture” some of the local fauna, which this area is full of.

After Po di Gnocca on a characteristic floating bridge, you’ll reach the mouth of the Po di Goro and the white beach at the Gorino lighthouse, which hosts a small inn. From the port of Gorino, you’ll arrive here biking amidst the cane thickets but also by boat from a mooring post along the road between Santa Giulia and Gorino.

A Stop in History

Once you’ve headed back inland, don’t miss the stands along the sides of the road, where you can buy, taste, and photograph the products of this land – first and foremost, pumpkins in all shapes and colors.

Then you can discover the origins of the Abbey of Pomposa which date back to the sixth–seventh century when Benedictine monks chose to settle an area between the Po and the sea. The most important building is the Church of Santa Maria, a Romanesque masterpiece, whose shape and materials are inspired by the Byzantine style of Ravenna. On the façade there are decorations that embellish the bell tower, rendered airy by multiple windows. The flooring is a precious mosaic while the walls that cover the nave and the apse are completely frescoed with stories from the Old and New Testaments and the Apocalypse.

In the adjacent Museo pomposiano you’ll see frescoes and stuccoes that illustrate the history of the complex; the museum itinerary also includes the Chapter Hall and Refectory – both decorated with frescoes from the 1300s – the “Sala delle Stilate” and the “Palazzo della Ragione.” 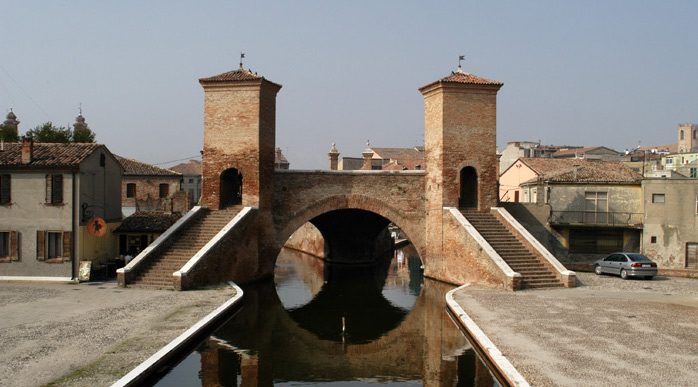 From here head to Ravenna until Comacchio, Ferrara’s “small Venice.” Its historic center is a tangle of roads and canals connected by small bridges, the most famous being the “Trepponti” by the architect Luca Danesi who designed it in 1634 for defense in the spot where the four waterways giving access to the city met.

Don’t miss the cathedral founded in 708 and rebuilt in the late seventeenth century. But the greatest attraction is the Roman ship found near Comacchio and today on display at the Museo La Nave romana di Comacchio. In fact, the Fortuna Maris is a ship that dates to the end of the first century BC, used for maritime and river commerce. It shipwrecked near the mouth of the Po and ran aground quickly, thus ensuring its preservation over the centuries.

Upon leaving Comacchio we suggest you visit the valleys. The best way is to use a bike, with binoculars and a camera. The richest and most spectacular itinerary is along the Fattibello banks until Casone Foce. From here you can only go on foot or by bike along a thin strip of land that leads to observation points on the valleys where you can easily spot pink flamingoes and numerous species of birds that live and nest in these areas.

Continuing along, you’ll reach the salt mines of Comacchio and then the Lido degli Estensi, on the Adriatic sea. 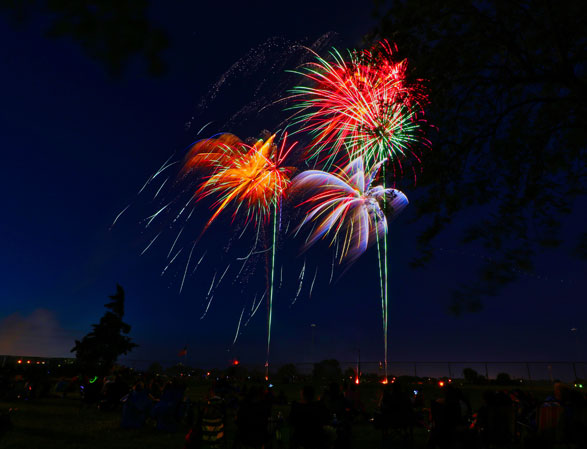 Cooking classes? It's beautiful on a farm!