The best cycling routes for families in Italy

From north to south, check out our staff’s selection of the best cycling routes for families in Italy!

Cycling tourism is becoming increasingly popular in Italy. Biking around the peninsula is an exhilarating experience and, considering the variety of routes, more accessible than you think. There are slopes suitable for families, beginners and, of course, more experienced riders.

Many of our farmhouses offer the possibility to rent bikes and are located near cycle paths and nature trails perfect for exploring on two wheels.

So which are the best cycling routes for families in Italy? These are the ones we think shouldn't be missed!

In 2018 opened the Garda by Bike trail, which has been nicknamed the Queen of cycling paths and rated the most spectacular in Europe. At the moment, it has a length of 1,980 meters and extends from Limone sul Garda to Riva del Garda in the province of Brescia.

In the future, Garda by Bike will be a 140-kilometer bike path and will pass through all three regions bordering Lake Garda: Lombardy, Trentino and Veneto. Along the route you can admire the lake and, in some places, even hop off to put your tired feet in the water.

In the meantime, enjoy the section open to the public which is surely long enough to delight (and tire out) the kids!

2. Bicycle path from Venice to Mantua

The bike path connecting Venice to Mantua is suitable for all ages. From the Venice Lagoon you can easily reach the Po and Mincio as the route is primarily flat.

Where to start? From Lido di Venezia bike to the town of Chioggia. Stop for a few moments at the fish market, then continue towards the Po Delta (keep your eyes open for the flamingos!) until you reach Adria.

At a leisurely pace you can complete the route in about five days. Don’t forget to book one of our agritourisms at each stop so you can rest and refuel with a hearty meal of authentic Venetian food.

3. From Bolzano to Verona 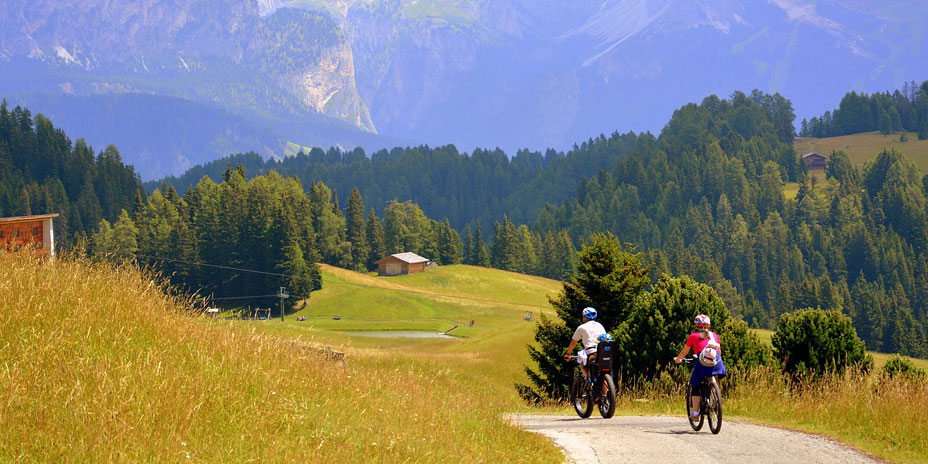 This is another simple and suitable path for the whole family. The bike path connects Bolzano to Verona, following the less trafficked roads along the Adige and rewarding riders with panoramic views of vineyards and mountains in the background.

Along this route you will pass the city of Trento and the town of Rovereto. Verona will be your last stop: riding over the Ponte di Caselvecchio you will enter the city where you can finally admire the majestic Arena.

Travel time? About two to three days. Don’t forget to treat yourself to a well-deserved meal of local food and wine at one of our farmhouse restaurants around Verona.

4. From San Candido to Lienz, Austria

If you’re looking for a bike path far from the chaos of the city, you’ll find it here in South Tyrol on the border with Austria.

The route from San Candido to Lienz is 44 kilometers long with ascents up to 500 meters. You'll ride through spectacular mountainous landscapes with huts, meadows and larch forests. Those who prefer a one-way ride can stop at the railway and return by train.

The travel time is between four and six hours. At the end of the day, enjoy a restful break at a typical South Tyrolean farmhouse.

Going southwards to Liguria we find the Cycle of Flowers, a bike path that connects Genoa to Ventimiglia. The section between Ospedaletti and San Lorenzo al Mare is part of a decommissioned railway. The rest of the route will take you through small villages along the coast, including Sanremo and Arma di Taggia.

During summer stop at one of the many beaches along the route for a refreshing swim!

Also in Liguria, we recommend the "Maremonti" cycle path which connects Levanto to Framura. In the province of La Spezia, it takes you on a unique route through a series of restored and illuminated tunnels.

Along the way you’ll find openings and balconies where you can stop for a photo and admire the landscape. You can also take dip in one of the seaside coves but, as they aren’t easily accessible, do proceed with caution. The bike route is suitable for all levels of riders.

The Val di Merse cycle path starts at Montagnola Senese and passes through the Elsa and Cecina valleys reaching Maremma Grossetana. It’s a breathtaking Tuscan road that escorts you through pretty hills and lowlands.

The Val di Merse’s network of cycle routes are planned on countryside roads with little traffic. Starting from the village of Orgia, you will ride through a really nice part of the Val di Merse and then peddle on to San Rocco a Pilli and San Bartolomeo, Barontoli, Poggio Salvi and Cerreto Selva. Take time to notice the changing of colors as you cross the hills of Siena. 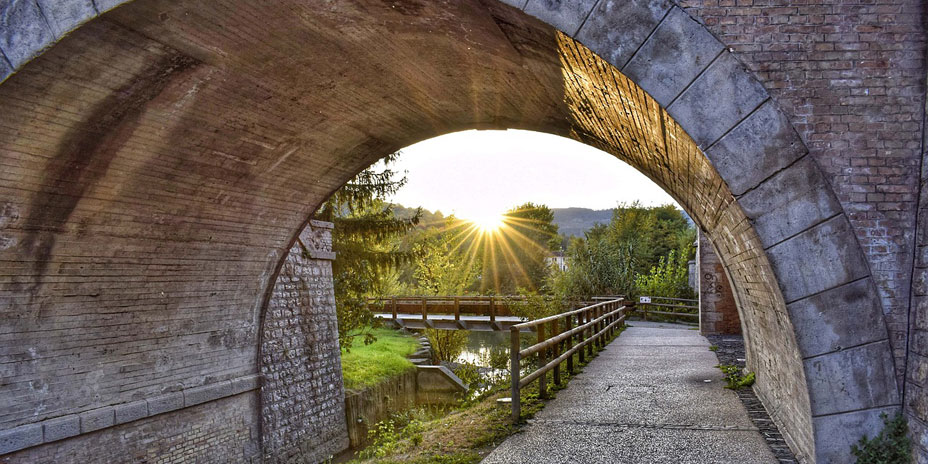 The Assisi-Spoleto Bike Path connects the two Umbrian cities along a 52 kilometer cycle path. This is an easy flat itinerary, except for the short stretch that takes you to Assisi where you will ride on roads with low traffic intensity.

From the old railway in Spoleto, the route then winds the next 51 kilometers to the city of Norcia. The itinerary offers scenic views of villages such as Montefalco, Trevi, Pissignano and Campello sul Clitunno, some of which are easily reached in short detours of a few kilometers. Between Spoleto and Norcia you will ride along a dismantled mountain railway decommissioned in 1968. We recommend a sturdy bike as the degree of difficulty increases, passing through narrow gorges and mountains and the Caprareccia tunnel.

From Spoleto (city of the Festival of the Two Worlds), you enter the Valnerina and will pass by enchanting villages such as Sant'Anatolia di Narco, Borgo Cerreto and Serravalle, finally arriving at Norcia.

Don’t forget to stop at one of our farmhouses in Umbria for a rest!

The Aqueduct Pugliese cycle path passes by imposing hydraulic works, like the monumental waterfall built in 1939, and other unknown places where you can see testatments to industrial archaeology.

The entire bike trip can last between seven and nine days.

10. The Cycle Trail of the Sun

On the island of Sicily you will find what is considered the Brenner of the South.

The Cycle Trail of the Sun is 3000 kilometers long and was built by FIAB (Italian Federation of Friends of Bicycles). It’s an integral part of EuroVelo 7 that connects the Valla dell'Isarco along the Tuscan-Emilian Apennines, Florence, Rome, Naples and then Sicily.

This bike path is suitable for experienced riders as there are steep slopes and sections where riding on the road is required.

Agriturismi a stone's throw from the sea