What to eat in Salento: culinary traditions in southern Puglia

A journey into the traditional cuisine of Salento, to discover the taste of this wonderful region of Puglia, its culture and its most authentic dishes.

Welcome to southern Italy! In addition to the fabulous climate, beautiful beaches and gorgeous sea, the food in southern Puglia makes it a truly delectable destination. In the beautiful area of Salento, ancient flavors, regional specialties and a few secret recipes are reason enough to pay a visit to this enchanting culinary paradise.

Try Salento cuisine in one of our agritourism!

In homes and restaurants, on the streets and during the holidays, Salento’s local cuisine lives up to every occasion.

Many meals start with pittule, small fried balls of bread typical of Puglia and the neighboring regions, but it’s especially in Salento that they’ve found their home and become a genuine local product. What to eat them with? Everything! Salty or sweet, from mussels to honey, and even fried food.

Another excellent local product is the pirilla salentina, or pitilla. A circular-shaped focaccia, its dough is baked in a wood-fired oven so the surface stays smooth and crunchy while the inside remains soft. This tasty peasant bread is usually eaten hot, straight out of the oven, either alone or stuffed with ricotta cheese, anchovies or olive oil. 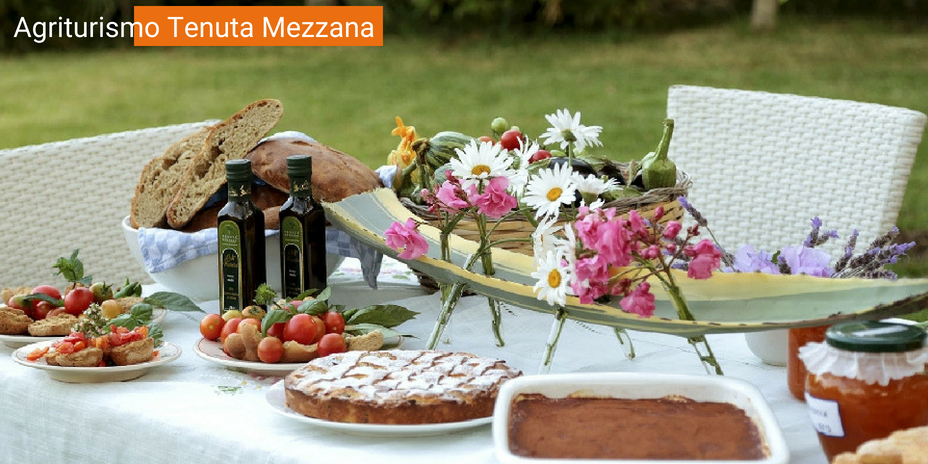 Typical products from Salento at the Agriturismo Tenuta Mezzana

Puccia salentina is the king of street food here. In the province of Lecce, you can find it at special shops, so-called puccerie. So, what is it? Puccia is a round flat bread that is sliced in half and used to make a variety of sandwiches, including a local favorite with stewed horse meat.

In Salento, appetizers and street food often overlap so it’s common to start a meal with some pittule or pucce, or other street bites like turcinieddhi and rustici leccesi.

For adventurous eaters, the first are entrails wrapped in lamb gut, and then grilled and seasoned with parsley and fennel. Perhaps more of a crowd pleaser, rustico Leccese consists of a thin sheet of pasta stuffed with mozzarella, tomato and béchamel.

Curiosity: some experts have noted the non-local provenance of ingredients in rustico Leccese, suggesting a foreign origin. Perhaps it's a distant relative of the French vol-au-vent, or was introduced to Salento by a noble family from Lecce.

Other appetizers highlight local products prepared in various ways. From stuffed artichokes to eggplant meatballs, peppers with muddhica (breadcrumbs) to fried scamorza, and not to be overlooked, the potato pitta, a tasty potato mixture with a filling of fried onion, tomato sauce and olives.

Salento’s first courses feature a variety of traditional homemade pastas. One of the most characteristic is sagne ncannulate, a household recipe dear to every family in Salento. Made without eggs using wheat semolina, the dough is twisted around one finger or a tube to give the pasta its shape, and then served with a rich tomato sauce and ricotta forte salentina.

If you want to try something truly typical, order a first dish reflective of Salento’s peasant culture, like ciceri and tria. Ciceri are chickpeas, and in this simple dish they are cooked in a pot and then dressed with olive oil, chilli pepper and rosemary. Tria, on the other hand, means fried pasta. Rather than boiling all the pasta in water, some of it is thrown into a pan and fried in oil, giving the dish a crispy texture and crunch.

Also worth a taste are the muersi fritti, cubes of fried bread arranged on a soup of chicory, green peas and tomato; faveneddhe and cicureddhe, a puree of broad beans and chicories which is both hearty and simple; and finally, granu stumpatu, which literally means "beaten up". Nothing more than boiled wheat that has been crushed with a mortar, it’s combined with tomato sauce, fried onion, pecorino cheese and basil. A surprisingly tasty delight! 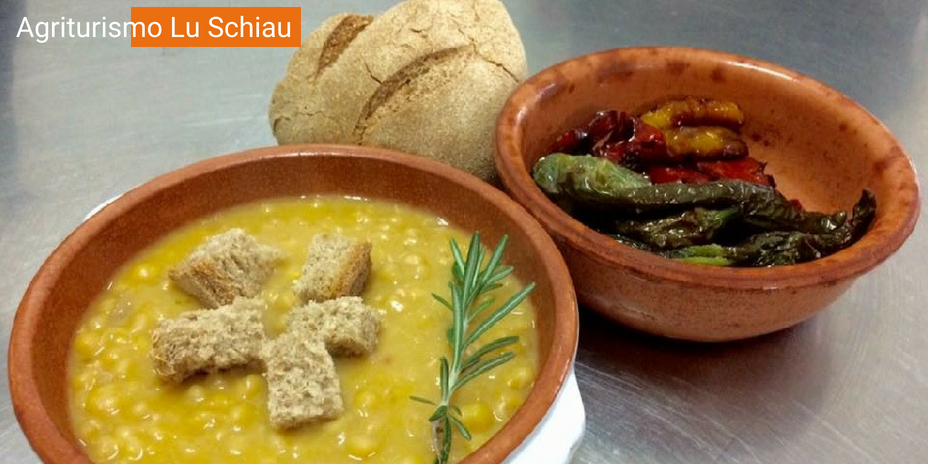 A common second course in Salento is chicken cusutu nculu, loosely translated as “stuffed chicken”. The preparation is very simple: remove the chicken innards, chop them up and then add them to a mixture of bacon, onion, oil, salt and chili pepper. Put the stuffing back in the chicken’s cavity, sew the opening and bake in the oven. This classic dish is often found on the table during the holidays.

Another typical second of Salento is purpu alla pignata, or horse meat stew. One of the most authentic dishes of this territory’s ancestral heritage, it’s still sought after and served at rustic restaurants and farmhouses. Cooked strictly in a pignatta, a special terracotta pot, the stew simmers slowly in tomato sauce, onion and herbs. Some chefs add a dash of chili, and the dish is served!

Of course, Salento is also rich in seafood which can be eaten in all kinds of sauces and preparations, from classic to nouveau. A specialty typical of the Gallipoli area is scapece, a unique dish popular in local restaurants and during festivals in Salento.

Gallipoli scapece features locally caught fish like boghe or zerri, which are fried and then marinated in vinegar and saffron. The dish is then composed like a lasagna, alternating the fish with layers of breadcrumbs in a succulent succession of flavours.. 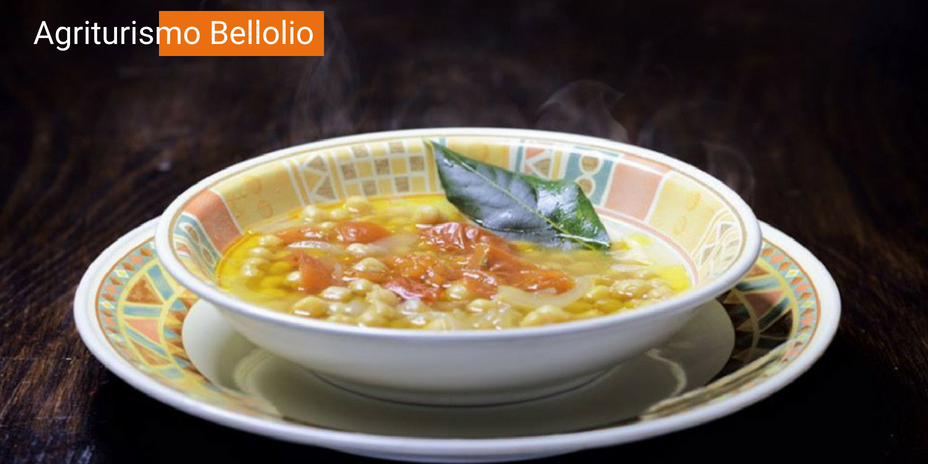 The taste of Salento at the Agriturismo Bellolio

What do you think of when it comes to Salento's desserts? We immediately envision pasticciotto, a cream-filled pastry from Lecce, which pairs perfectly with a stroll along the baroque streets of the city.

Holiday periods bring out other specialties around Salento, like at Christmas when purceddhuzzi appear: fried sweet dough pastries flavoured with lemon and hints of citrus, and decorated with sugar. Or try the bocche di dama covered in icing, a classic dessert honoring Sant'Agata, whose recipe probably descended from Sicily’s minni di vergine found in Catania.

Last but hardly least, we have pitteddhe. Like a small crostata similar to cartellate in Puglia, they are filled with grape or fig jam, or other sweet fruits.

This completes our edible excursion in Salento, a land that has carefully maintained the heritage of its ancestral dishes. Taste your own way through Salento with a stay in one of our agriturismi! 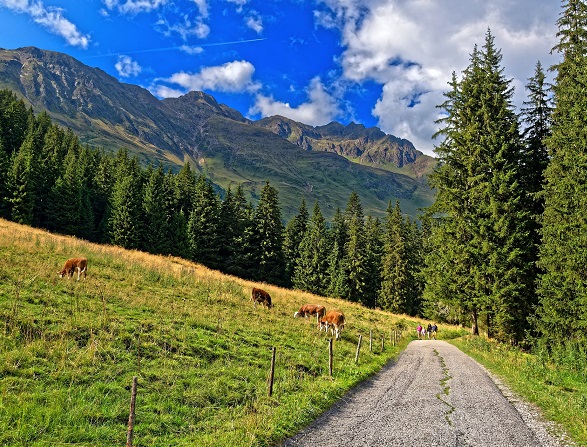 Make it a 'green' Easter 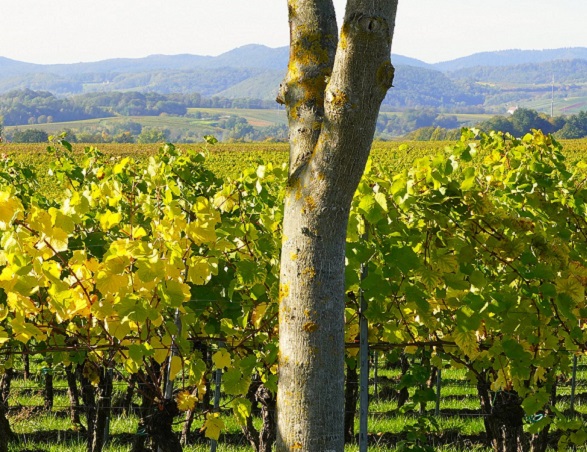 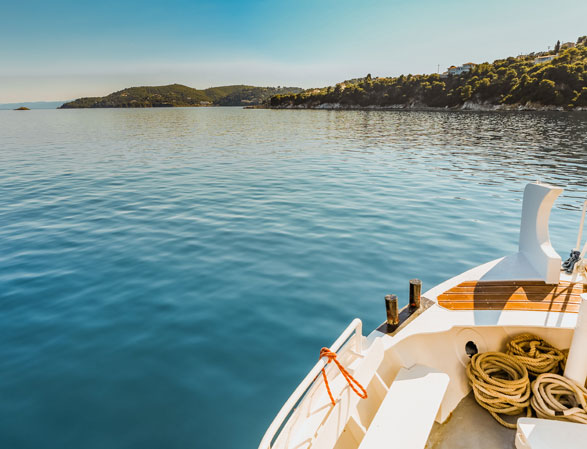 The 10 most beautiful beaches in Apulia